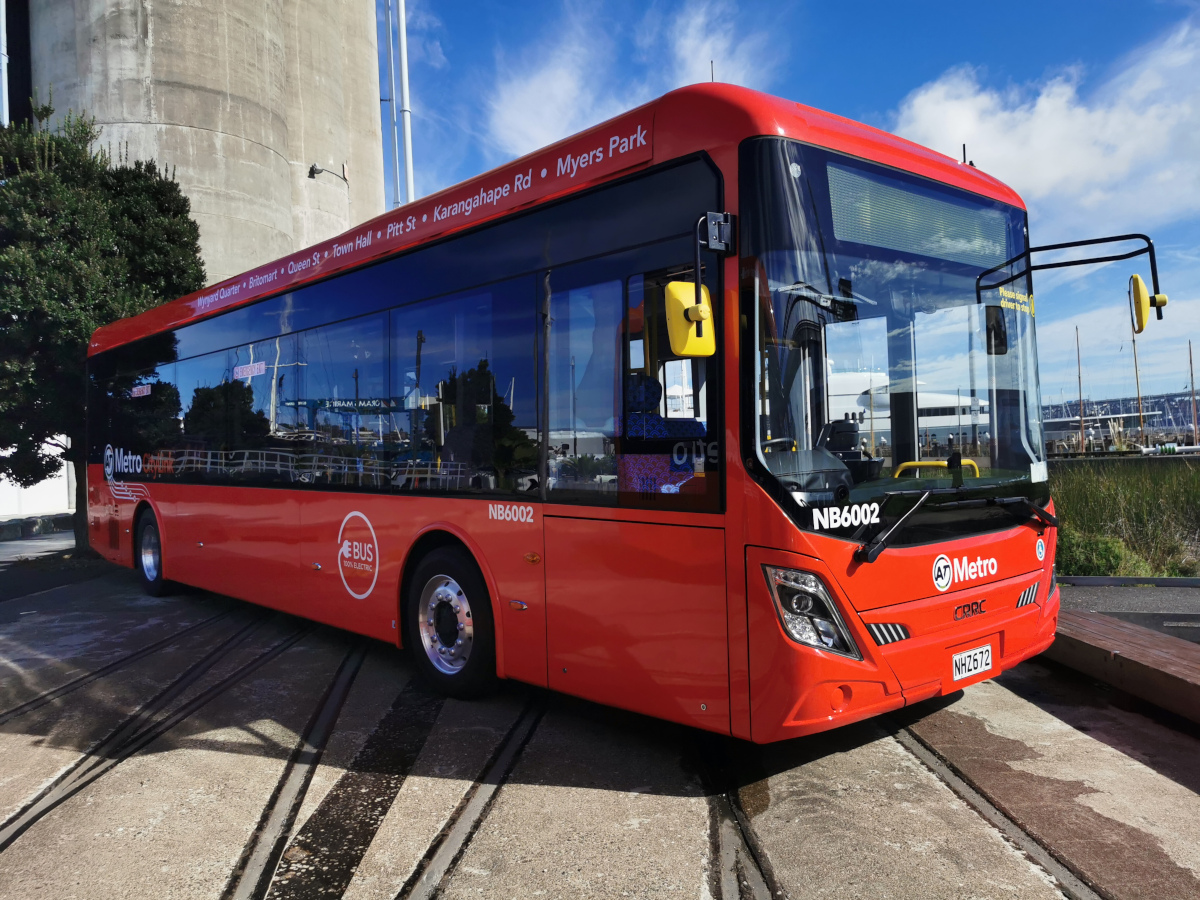 NZ Bus operates a fleet of over 780 buses from 11 depots and employ approximately 1,700 people.

A History of Innovation

Our history demonstrates our innovative capabilities. Examples of what we have achieved through innovation include: 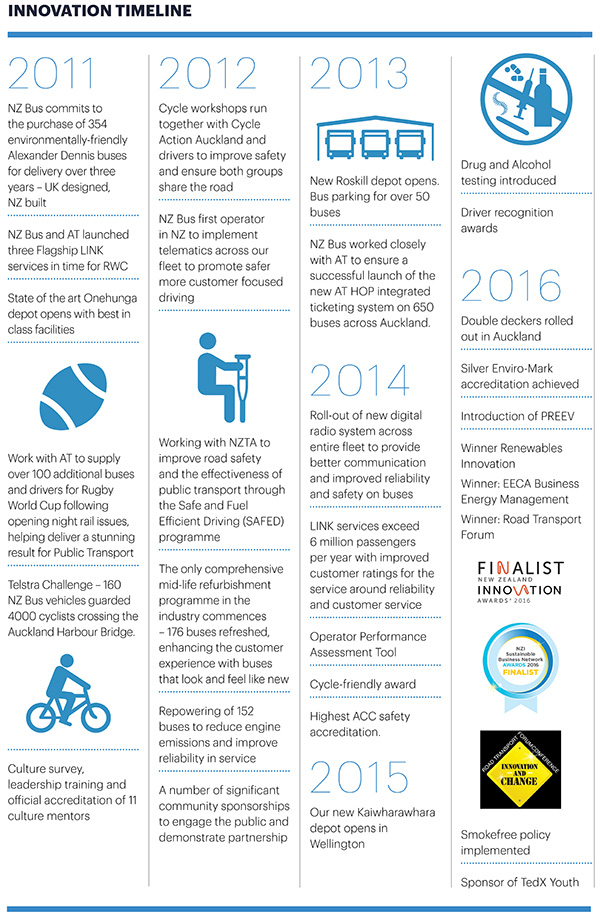 The Wellington contracts secured have an average term of 10.8 years, and a total value of approximately $323 million, providing our customers, people and stakeholders with long term stability and giving us the certainty we need to innovate and invest. Growth prospects are positive and are highlighted by a forecast $31 million of new investment in fleet, including an additional 17 double decker buses.

October 2017 – NZ Bus confirms it has successfully concluded negotiations to secure long term scale and stability for its Auckland bus operations. With 20 long term contracts in Western, Central and Northern regions of Auckland secured, NZ Bus will continue its long-standing partnership with Auckland Transport. As part of the Auckland contract renewals, NZ Bus expects to invest around $47 million in new fleet, including an additional 75 double decker buses, to support its existing fleet and infrastructure investment.

February 2017 – NZ Bus begins trialing its new BYD eBus in Auckland and then in Wellington, as another part of its strategy to lead the transition to electric-powered public transport in New Zealand.

November 2014 – NZ Bus attained the highest endorsement from ACC (Accident Compensation Corporation) for best practice and commitment to continuous improvement in workplace health and safety. This demonstrates our assurance to the public about continuous improvement in both health and safety and injury management practices over the last 12 months.

June 2013 – NZ Bus welcomed the passing of legislation introducing the new Public Transport Operating Model (PTOM). The changes incentivise local authorities and operators to form strong partnerships and work together on long term strategies to plan the shape of New Zealand’s public transport networks. NZ Bus was involved in developing this new model from the start because the model is a vital component in enabling cities to plan for their future transport needs.

May 2013 – Having significantly grown its North Bus business in Whangarei to a 41 bus operation over five years, NZ Bus sold the business to allow all of our attention to be focused on core activities.

December 2012 – NZ Bus announced that it will invest over $8 million in new fleet in Wellington, with 20 new ADL Enviro200 buses to hit the streets from November 2012.

December 2012 – Following on from deals with Team Talk on radio communications, NZ Bus announced its investment in new on-bus technology, partnering with Vehicle Technologies of New Zealand and MiX Telematics to deploy a vehicle and driver data capture system across the entire fleet.

The system provides feedback to drivers in real time about their driving style and engine data to fleet maintenance teams. Combined with the heavy focus on programs such as Pathway to Safer Driving and Safed, this exciting new partnership enabled NZ Bus to continue to deliver on its promise to be the best in class in safety, driver performance, fleet management and customer service.

October 2012 – NZ Bus announced its investment in a new radio communications platform for its fleet of 1000 buses in Auckland and Wellington. Radio communications are a critical function within NZ Bus for ensuring both the safety of our 1600 bus operators and our customers along with the delivery of reliable public transport services.

NZ Bus has entered into a new phase of its partnership with TeamTalk who will provide new radio network services and equipment to its entire fleet. This exciting development in the relationship involves the deployment of Motorola equipment using emerging Digital Mobile Radio (DMR) technology.

October 2012 – NZ Bus announced changes that would further improve the already highly successful Airport Flyer service in Wellington. From January 2013, we significantly increased service frequency, with the Airport Flyer bus departing Wellington Airport every 10 minutes during peak times to Wellington train station and back instead of the current 15 minutes.

March 2012 – he market welcomes an announcement by the Minister of Transport, Gerry Brownlee, introducing a new public/private framework for procuring bus and ferry services known as the Public Transport Operating Model (PTOM).NZ Bus was a key member of the working group that designed PTOM.

November and December 2011 – NZ Bus places an order for a further 80 Euro 5 Buses from Alexander Dennis Limited (ADL), adding $32m of investment to the $50m investment in 118 ADLs ordered earlier in 2011.

October 2011 – New Zealand win the Rugby World Cup and NZ Bus carry over 120,000 Rugby fans to and from Eden Park and Westpac Stadium. NZ Bus worked in partnership with Auckland Transport and the Greater Wellington Regional Council to deliver safe and reliable bus transport for RWC events. 170 drivers received special RWC Customer Care training to provide outstanding service to visitors and fans traveling to the games, and to all customers during the tournament. The team was recognised for their RWC customer service by Transport Minster Stephen Joyce and RWC Minister Murray McCully.

We launch a new state-of-the-art depot in Onehunga – Over 200 operators and support staff move into the Onehunga base in Neilson Street. The new facility boasts parking for over 100 buses, a body shop, fully equipped workshop, a gym, drivers’ room, training room and modern offices and meeting facilities.

September 2011 – The World’s Here to Play. NZ Bus is awarded a contract to transport rugby fans to and from Eden Park in Auckland and Westpac Stadium in Wellington.

May 2011 – On the 8th of May, HOP, Auckland Transport’s new integrated ticketing system, is launched on North Star buses. Similar to a Snapper card in Wellington, North Star customers were the first to use the new tag on/tag off HOP system in Auckland. HOP customers can save up to 10% on cash fares. Two weeks later Waka Pacific go live with HOP.

January 2011 – NZ Bus announced a $50 million investment in new fleet, the single largest investment in the history of the company.

After an intensive search, NZ Bus chose UK based Alexander Dennis as its preferred supplier of a fleet of 118 new Enviro200 buses. These buses are of the highest quality, reliable, safe and environmentally friendly, with a Euro 5+ emissions standard. As a proudly New Zealand owned company, we will always endeavor to pursue the best solution for our customers and stakeholders, and, to ensure that the economic benefits of this deal flowed through the New Zealand economy, Kiwi Bus Builders were awarded the contract to assemble the buses at their high tech facility in Tauranga.

The flow on effect is not only in the plant, premises and jobs required for the assembly, but also in the fact that 25-30% of all the bus components are locally sourced with a projected four-year revenue opportunity for New Zealand suppliers of $38 million. 102 direct new jobs were also created at Kiwi Bus Builders to fulfill the NZ Bus order – this is an injection boost of over $4m of wages into the Tauranga economy.

June 2010 – NZ Bus joins forces with ARTA and launches a new high frequency bus service, branded b-line. The service runs a minimum of every 15 minutes from 7am to 7pm each weekday on Dominion and Mt Eden Roads.

b.line represents a significant step forward for our customers, who told us that one of the biggest barriers to catching a bus in Auckland is the complexity of the public transport system. b.line simplifies the experience by providing clearly identifiable buses, bus stops, shelters and timetables.

September 2009 – The last of the new fleet of trolley buses hit the streets of Wellington. The new trolley buses, built by New Zealand-based bus and coach manufacturer DesignLine, replaced an ageing Wellington fleet, which first entered service in 1981. Costing more than half a million dollars each, the buses not only provide environmental benefits but are a significant step up in increased passenger comfort and reliability.

June 2008 – Snapper introduced on all GO Wellington services. Through our partnership with Snapper, we enabled thousands our GO Wellington customers to pay for their bus travel using a Snapper card. The first tag on/tag off bus ticketing system made boarding a bus a whole lot quicker and easier than paying with cash. Snapper has been making bus travel in Wellington a breeze since 2008.